If you travel to the significant Kurdish cities of Şanlıurfa, Mardin, and Diyarbakır, you will see many women with tattooed faces, hands, feet, chests, and breasts. Some of my family members practice DEQ. For instance, my grandma has it on both her hands and her face. Growing up, I was fascinated by these markings all over the women’s bodies that I knew. I would notice their subtle differences. I felt like each tattoo was telling a unique story, and I needed to learn its language. Later in my life, I started to research the origins of DEQ and interviewed many women to understand their motivations for engaging in the practice.

DEQ is a secret language, mainly among women. It is believed that nomadic gypsies passed their practice of DEQ to the settlers of Mesopotamia as they traveled through the territory. In some cultures, tattoos stand for religion, power, and joy; others believe the practice of DEQ has therapeutic power. According to some women I have interviewed, DEQ is a reminder of loss, a way to immortalize their loved ones. They keep essential memories constantly in mind with powerful symbols on apparent parts of the body, such as the face, feet, arms, hands, and chest.

Some of the DEQ symbols in Şanlıurfa, Mardin, and Diyarbakır are similar to the rug motifs that Bajer is now bringing to the surface. For instance, the motif that protects the owner from bad luck, known as the evil eye, is almost the same as the one that Bajer has its Protection motif, taken from a symbol in the rugs. In a culture where women have traditionally been silenced, they have found other ways to communicate. Some weave their emotions into their rugs, while others inscribe them on their bodies.

DEQ differs from the modern tattoo with its unique ingredients and recipe, which varies across different ethnic groups. DEQ tattoo ingredients include sheet metal soot or ash, coal dust, milk from a lactating mother who has weaned a female baby, which is believed to make the tattoo stick permanently, and liquid from an animal’s gallbladder. The application of DEQ includes embroidering the mixture into the skin through one to three needles.

With modernization and globalization, DEQ is no longer widely practiced. Many women who have tattoos received them around 7 or 8 and are now elderly. People are losing interest in this ancient tradition as fashions change. Although plenty of younger men and women have visible tattoos, they do not use the traditional symbols. Within 10 to 15 years, DEQ may have largely vanished from the Mesopotamian region. But Kurdish artists can carry Deq on in other ways. That is what my DEQ on my finger reminds me of.

I have been amazed by the art of DEQ and captured the most adorable DEQ samples in the region.

The following are examples of the DEQ tattoo designs and their interpreted meanings. 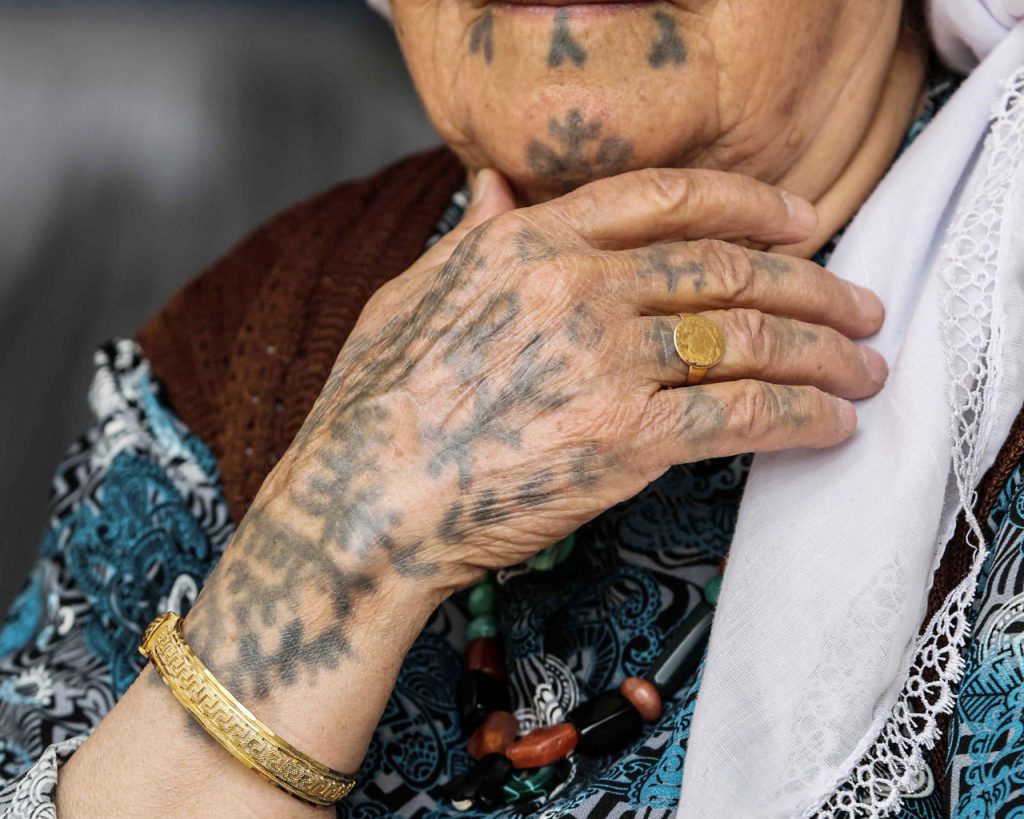 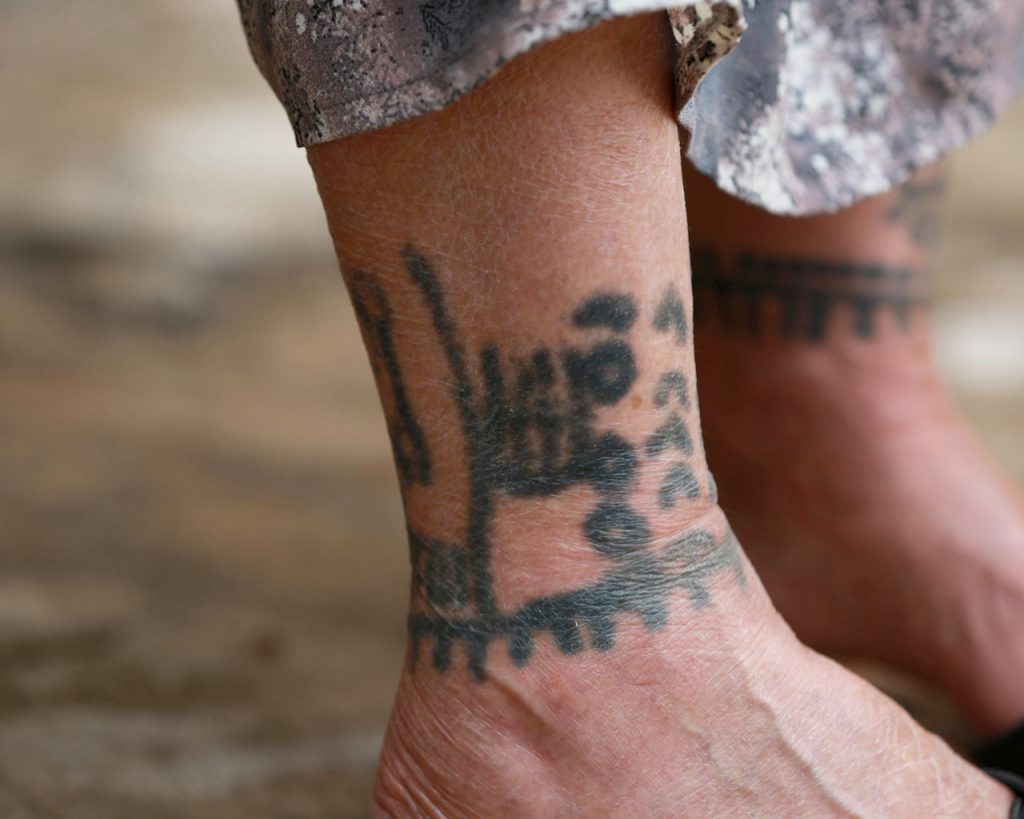 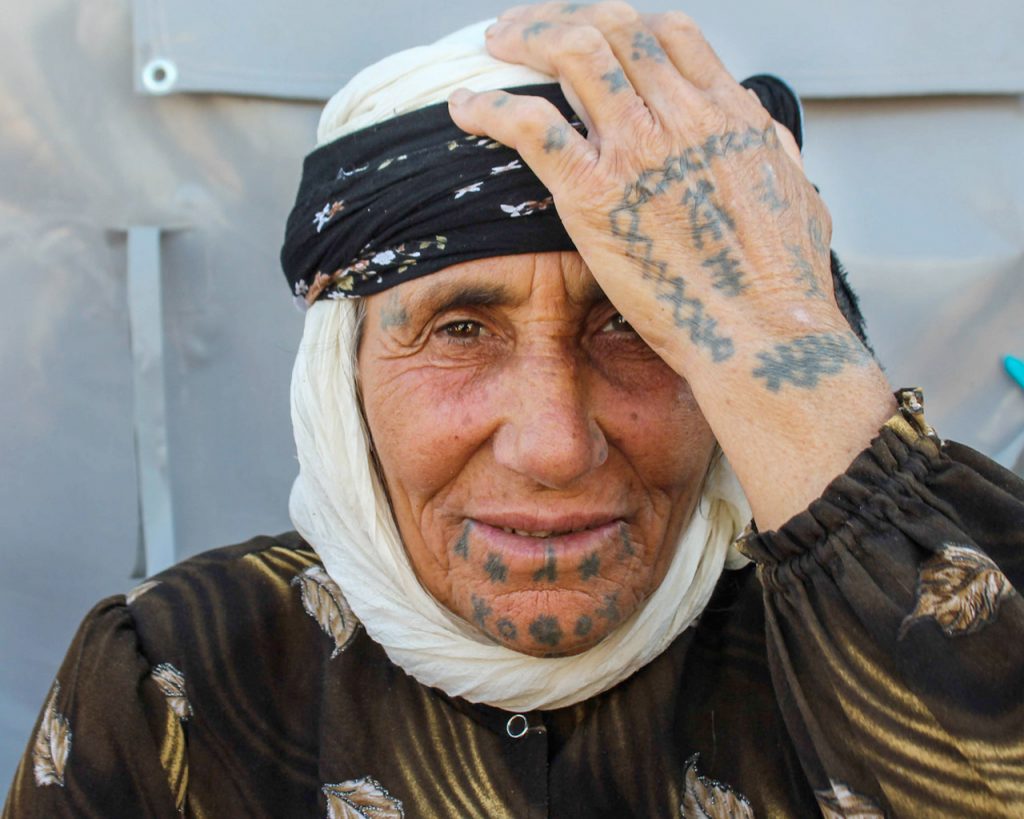 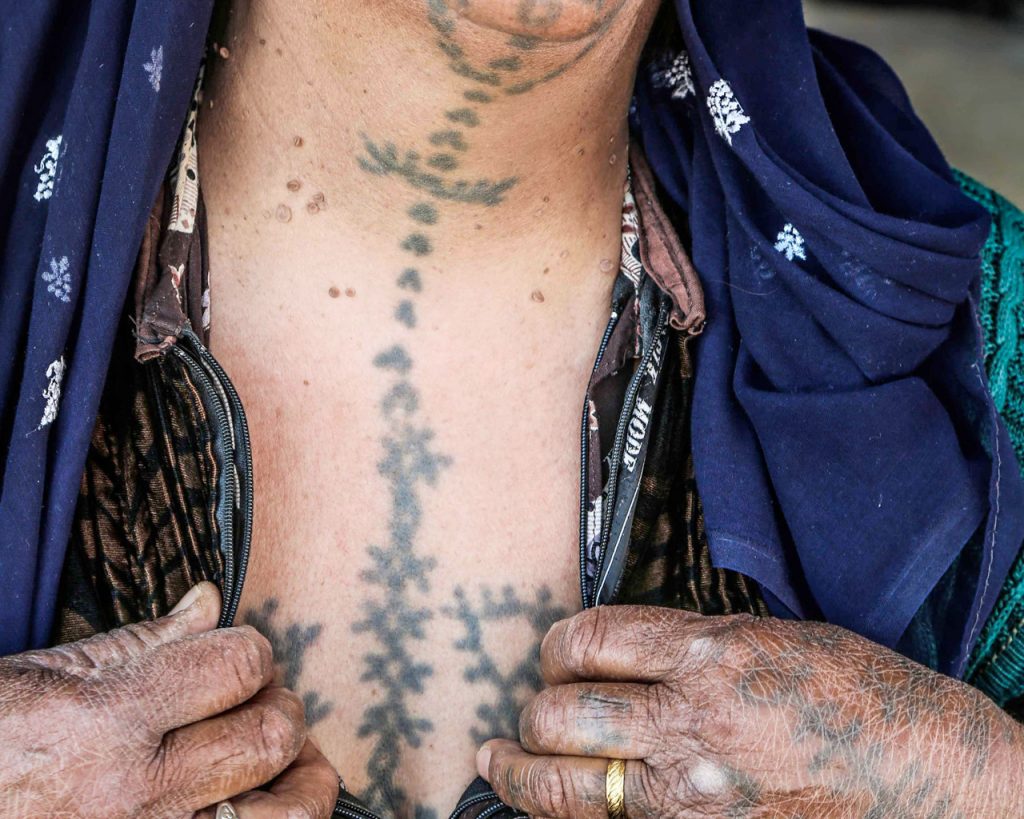 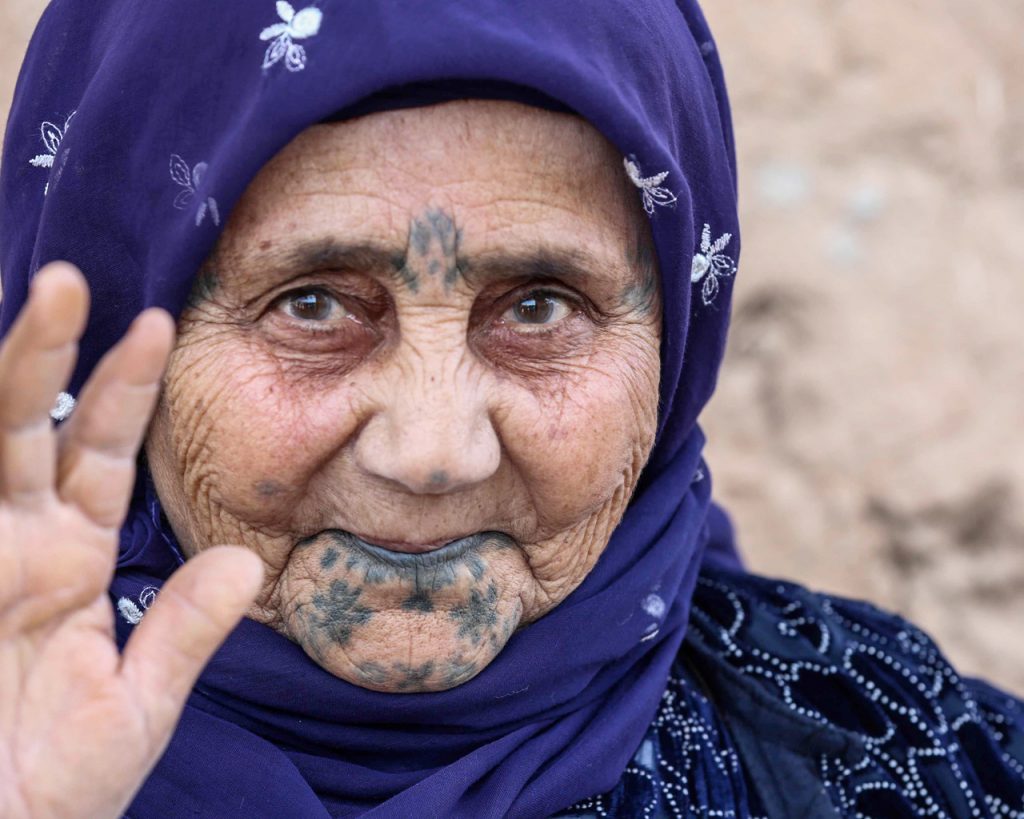 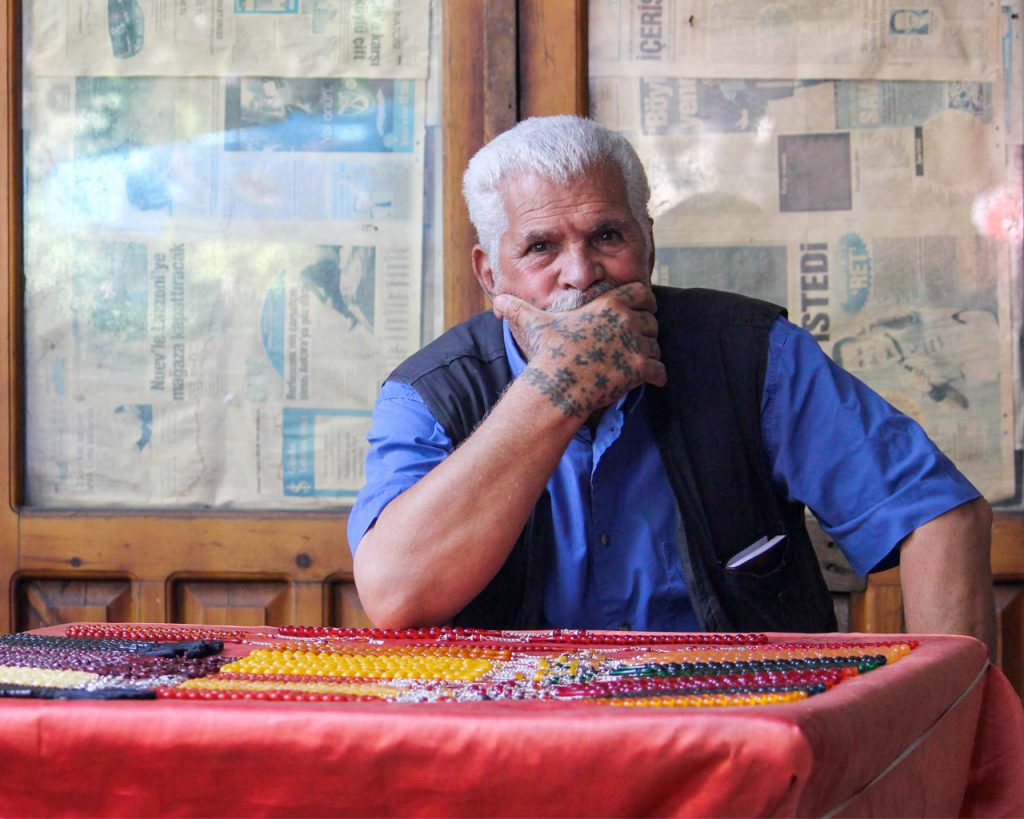 (Pic 1,2)    Bracelet-shaped tattoos on the wrists are symbols of loyalty and commitment to purpose.

(Pic  3,4)   Combs and scissors shapes on toes and fingers are to bring good luck and charm to the person who bears them.

(Pic 5)   Motifs that come in the form of sun and moon date back to pre-Islamic times; in the ancient Kurdish religion of Yezidism, they were signs of nobility and divine powers. The secret meaning of DEQ is visible all around the body.

(Pic 6)   Motifs that come as a tree of life derive from a mythical belief in a mother goddess who attributed fertility to women. It appears on a section of women’s bodies from the neck to the breast. It may also reference the developmental stages, sexuality, the initiation of life, and the termination of the same through death.

(Pic 7)   A motif embedded on a circle of the woman’s chin signifies women’s desire to reproduce and protect against bad omens and evil eyes.

(Pic 8)    Rich tattoos on women’s lips have also been widely attributed to many stories. Many women believe it to be a sign of protest and riot.

(Pic 9)    Men, however, generally have a different view and interpret it as a sign of a man who was pictured kissing a virgin woman in the Mecca market in pre-Islamic times. The man also carries the secret meaning of DEQ.

He was born in 1988 in Şanlıurfa. As being the oldest son in the family, Murat had to take up his father’s job and started his career in the marketing of agricultural products sector. He got interested in photography during his childhood when a photographer asked to take his picture while working in the store. Since then, photography became his main passion. From his amateur years of photography to become a professional, he has made significant changes in his community via his photography skills. His most recent project- Göbekli Tepe-have been nominated for many national awards. He is also the founder of the Göbekli Tepe Photographic Art Society in Şanlıurfa, Turkey with his friends who are committed to the art of photography; and he still continues to work actively in this field.

The Hot and Only: Urfa Isot

The hot and only Urfa isot: We call it special for a reason. If you love spicy food and want to try something different, Urfa Isot might be your...

In my hometown, a multicultural city on the border with Iraq, I grew up hearing about the Yazidis. The strong bonds that have existed for decades between our families...

If you travel to the significant Kurdish cities of Şanlıurfa, Mardin, and Diyarbakır, you will see many women with tattooed faces, hands,...
Next Post
Home
0 Wishlist
0 Cart
My account
This Site Uses Cookies To Deliver Website Functionality, For Analysis And For Advertising As Described In Our Privacy Policy. If You Agree To Our Use Of Cookies, Please Continue To Use Our Site.
Accept